Louis Delétraz showed blistering form as he raced to a pair of podium finishes at the ninth round of the FIA Formula 2 Championship in Mugello this weekend.

The results secured Louis’ third and fourth podium finishes of the season and earned him 29 points. With three events and six more point-scoring opportunities remaining in 2020, Louis is P7 in the drivers’ standings – just 39 points behind the series leader.

The 23-year-old had to work hard to secure a double podium in Italy’s Tuscan Hills. His prospects during Friday’s all-important qualifying session were compromised when he was unfairly blocked by a rival. That meant Louis lined up P12 on the grid for the 33-lap Feature Race.

He adopted the alternative prime/option tyre strategy and, after his qualifying misfortune, a slice of luck finally came his way when the Safety Car was deployed.

It allowed the field to bunch up and Louis expertly took advantage of his car’s extra grip to spectacularly carve his way through the field.

The Haas F1 Team test and reserve driver surged from the lower reaches of the top 10 to move into P3 on the penultimate lap. Louis’ standout pace also earned him some additional points after he set the fastest lap of the race.

“I’m very happy with the result,” he said. “We had some troubles in qualifying. I got blocked, so we got robbed of a top-five start which is never helpful at a track where overtaking is extremely difficult.

“I had a terrible start and lost a lot of positions and I think we were back down to 19th at one point.

“When the Safety Car came out, I thought that was our chance. At the restart, I think I passed five or six cars in Turn 1, and then got the last move on [Felipe] Drugovich around the outside. I almost got Luca [Ghiotto] for P2, but I had to back out to avoid contact.

“I’m still happy with P3. It’s very good points and I got the fastest lap too. Thanks to the team for their excellent work.”

Louis lined up P6 for Sunday’s 23-lap reversed-grid Sprint Race and when the lights went out, he bolted into P3, bravely going around the outside of two rivals at Turn 1.

Brimming with confidence, he then moved into P2 shortly afterwards and maintained his position through to the chequered flag.

“It was a really good race, I had a great start and moved straight into P3,” Louis reflected.

“I had to go quite early to pass [Artem] Markelov. I saw the opportunity to overtake, I knew I had to make it work and I did straight away. Towards the end, I was struggling with the rear tyres but I could hold on to P2 which was perfect.

“We made the best of our races at Mugello. A double podium and a fastest lap means lot of points – joint top out of everyone this weekend. I have Le Mans next week but I will be ready and aim one step higher in Sochi and Bahrain.”

The F2 field has some time off next weekend, but Louis won’t. He’s heading to France to make his LMP1 debut at one of the world’s biggest motor races – the 24 Hours of Le Mans – with Rebellion Racing. 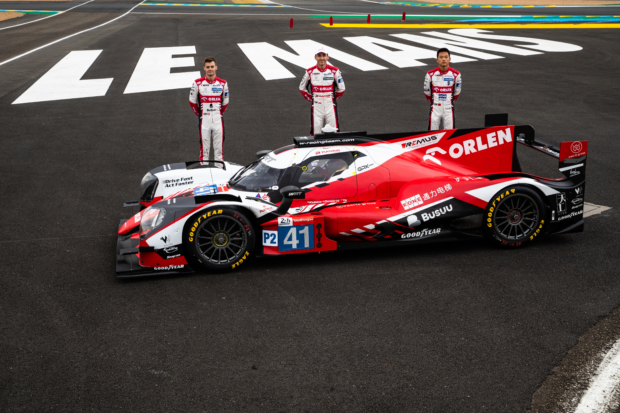